On Stags and Stereotypes

When taking into account Michael Growe´s German nationality, the choice of his subject matter might seem to be emblematic.  Born and raised in Warburg, a historic town surrounded by mountain ranges and located in close proximity to the vast expanse of the Teutoburger Forest, the artist is well-acquainted with landscapes and their mythical content. Poets and composers of German Romanticism, whose widespread works entailed countless clichés which still prevail nowadays, traced back the mythical and historical value of the German landscape to original folklore and Middle Age legends.

Michael Growe is aware of this German Romantic tradition and the concomitant sentimental, often pathetic attachment to nature, to which he seems to respond   through the title for his exhibition at Lu Yu art space, expressing an endearment to the animal: “Dear Deer”. In his recent series of works he seems to invoke, almost self-tauntingly, just this repertoire of stereotypes, featuring stags as clearly recognizable representatives of a heightened Romantic nature ideal.

Popular themes such as hunting scenes and the motif of the wild stag arise in the last decade of the 19th century, appearing as an incorporation of bourgeois sentiment and a nostalgic inclination towards an original or “natural” state of being, which was sought in the identification with an authentic, untamed nature. Epitomizing man´s profound engagement with nature is on one side the huntsman, who interacts with both the threatened and threatening condition of nature. On the other side stands the heroic wanderer, the poet, who visits the natural realm as a “locus amoenus”, a place of pleasure and inspiration. In turn, animals become prominent protagonists in paintings of the time. Especially the stag as the original inhabitant of dense forest regions was endowed with heroic, masculine features. The majestic figure of the unconquerable beast claimed natural space as a male domain. It eventually became an incorporation of victorious strength. In consequence stag antlers were exhibited as trophies, displaying the power and prowess of the successful huntsman.

Exaggerated to the extent of becoming kitsch in the late stages of Romanticism, representations of stags were however predominant throughout cultural history. The ancient paintings in the cave of Lascaux manifested a great number of stag images that refer to hunting activity, an interaction with nature by which early man obtained food. In a symbolical context, the images are imbued with meaning, reflecting this dependence on nature as a worldview.

One of the most prominent manifestations of the theme of hunting, which has found widespread acclaim by painters throughout the ages, is found in classical mythology, namely the tale of Diana and Actaeon in Ovid´s Metamorphosis. Diana, goddess of wildlife and the woods, takes a bath and rests in a hidden pool after a hunt. A young hunter Actaeon, accidentally catches a glimpse of the naked goddess. As a punishment, Diana transforms him into a stag. His own hunting dogs catch his scent, and tear him to pieces. 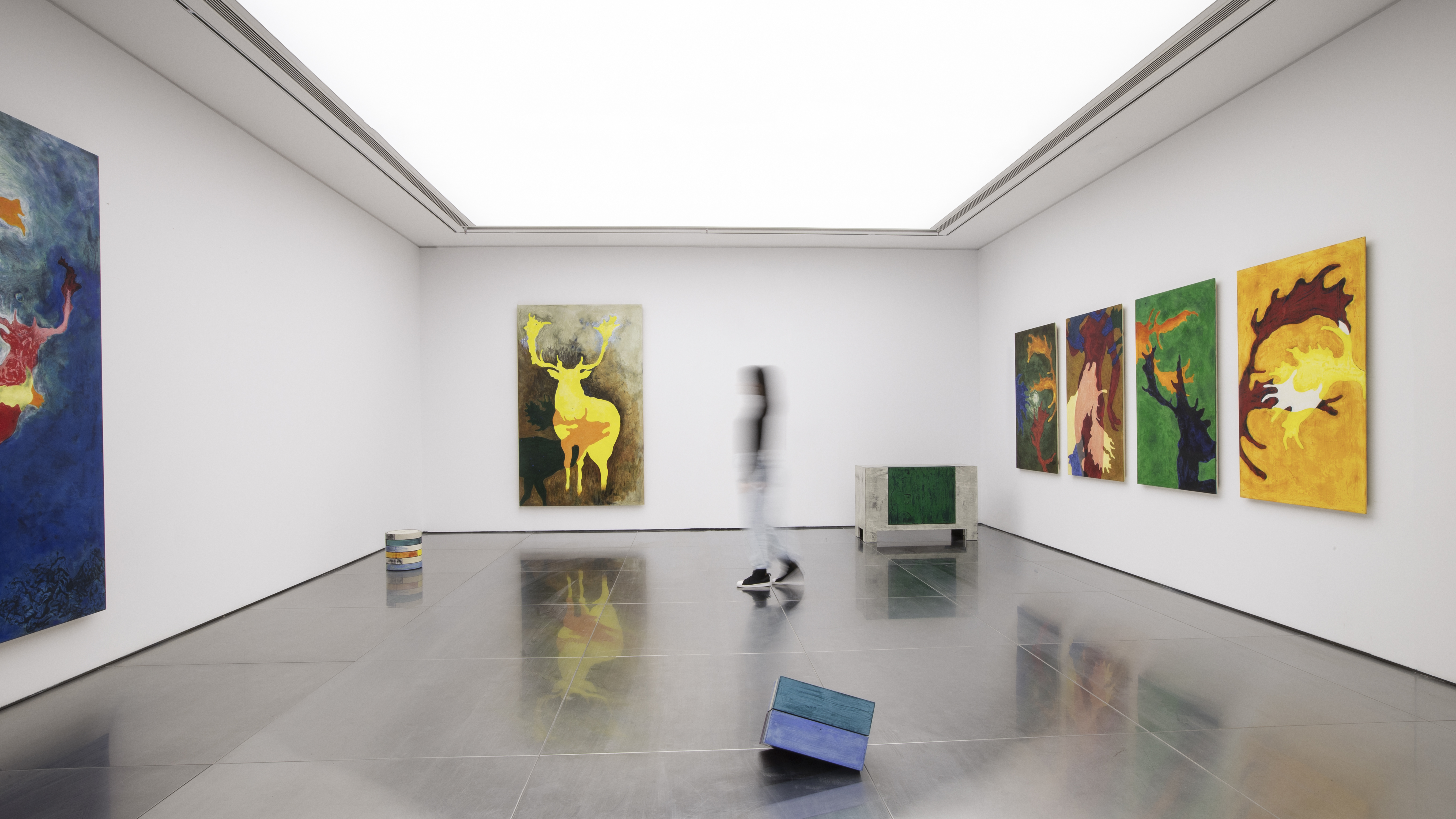 Although Michael Growe has a profuse knowledge and understanding of such cultural narratives and specifically German symbolic, he desists from illustrating any particular story or stereotypical image. In his paintings, Growe does not stage a narrative or arrange a dramatic scene. No glorious stag rises on a steep mountain range, emerging from a foggy sky. Rather, the artist liberates the figures from the confines of an original narrative on an abstract level. Although several titles of his paintings purposefully make reference to the myth of Diana and Actaeon, Growe´s images of stags and female silhouettes unfold like cut-outs on a color ground in a context-free, purely painterly space in which all illusionistic effects are abandoned.

Exempt from identifiable landscape elements or attributes, the composition is dominated by the flatness of color fields. No heroic stance, no monumental corporeality is evoked here. Instead, Growe´s stags are freely floating forms in colorful variations. Deer antlers appear as a predominant shape and become increasingly abstracted, to the extent that they begin to resemble flowing paint, spreading out unevenly over the surface. As the outline of the female body merges with the irregular line of antlers, classical compositional distinctions between fore- and background are overturned. As sleek shapes seem shuffled and superimposed like templates, the distinctive contours separating the individual silhouettes become intertwined in a network of lines, so that the interaction between the figures is limited to overlapping color fields. Sometimes the schematic shapes appear like shadows, the contrasts dynamically switching back and forth, like in a picture puzzle or optical illusion.

Many features of Growe´s paintings point to Pop Art, his aesthetic often recalls billboard advertisements with their striking colors, clear contours and catchy messages. Some paintings feature stark lighting effects, which simulate the glare of flashing car lights or a collision of antlers during a fight. Such explosive flashes bear an expressive, so that they seem like signals or bold captions and are accordingly depicted in the stylised format of comic book illustrations. On yet other paintings the elegant dance of swirling antlers and sinewy shapes is executed in the primary colors of blue, red, and yellow. These interplaying shapes are sometimes enhanced by hazy moonlight, which of course is reminiscent of romantic scenes.

Despite the strong superficial quality of Growe´s paintings, their process of production encompasses a sophisticated, time-consuming technique that is also applied by the artist in his sculptural works, in which he thoroughly explores the relationship between the surface and the body. To the artist, the physical reality of a painting is essential. With great skills Growe first treats the wooden board, which is the base for his painting, with a primer. He consequently applies layer after layer of paint, which is partly sanded off, so that subtle traces of a former paint layer always remain visible through the top coat in the end. Growe uses rabbit-skin-glue, powdered limestone, mineral pigments, linseed-oil and wax, materials that are firmly embedded in the history of painting.

Growe creates an eye-catching surface with a seductive, smooth finish that conveys a sensation of depth beyond illusionism, but on a painterly – and material –  level. He fills the flatness of the pictorial plane with reduced shapes and dynamic color fields, so that depth does not appear as a construction within the composition, but rather as an outcome of the immediate conditions surrounding the beholder. Growe does not aim to draw the beholder into a fictional space while distracting him/her from his/her factual surroundings. Depth is evoked here by subtle changes in color but is moreover inherent to the thickness of the wooden board, the carrier of the painterly surface. Depth is bound to and inseparable from material reality. In this sense, Growe pays tribute to the materialistic and minimalistic stance of Donald Judd, who claimed that “actual space is intrinsically more powerful and specific than paint on a flat surface.” (Donald Judd, Complete Writings, 1959-1975, New York University Press, New York, p. 184)

Growe´s works therefore visualize and emphasize the iconic value of the image, and as such, are reflections on stereotypical representations, as they are common in both Romanticism and Pop Art. At the same time, Growe´s paintings foreground their objectivity. With an ironic undertone, one might even state that his paintings, by means of their motifs, their surface appeal, and the reality of their physical presence – which might fulfill a practical purpose – both refer to and function as trophies. 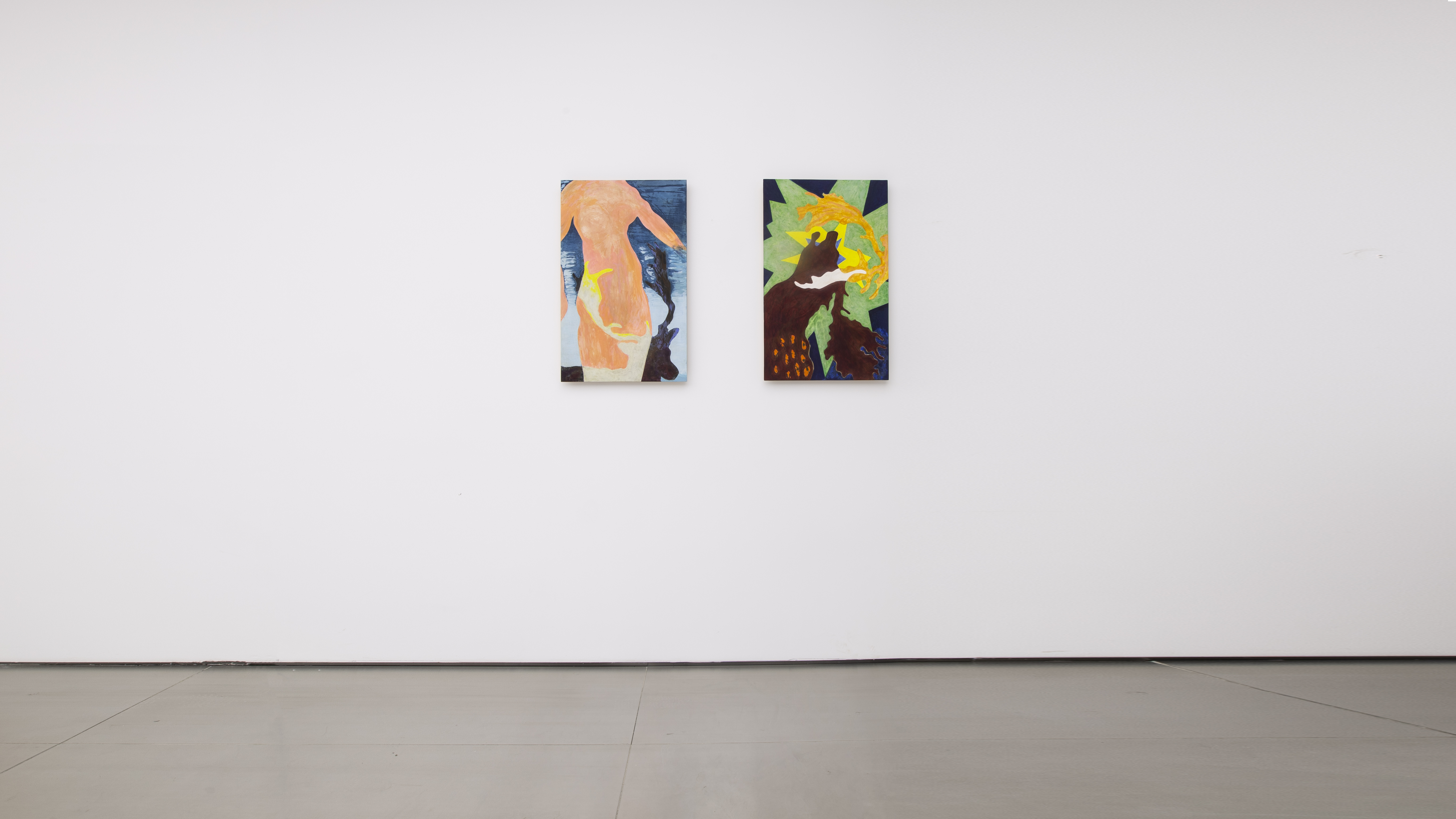